Leonardo’s continuous investment and consolidated experience in the naval sector enables it to meet every requirement for any type of ship, class and tonnage and to respond to the evolution of operations in a multi-domain maritime environment.

A key player in the supply of high-tech products and systems, Leonardo is taking part in the Euronaval exhibition, opening tomorrow in Paris, with its technologies for the naval sector. These technologies are the result of continuous investment and transversal skills that have made the company a strategic partner of the Italian Navy and a reference point for many naval forces worldwide, with its systems now integrated aboard more than 1,000 maritime assets.

Leonardo’s range of solutions, capable of meeting all requirements for the efficient management of any type of ship, class and tonnage, consists of advanced and modular technologies ranging from sensors, radar and communications to weapons systems for surface and underwater units. These are in addition to fixed-wing and rotary-wing aircraft - with more than 500 Leonardo helicopters in use today in over thirty countries for maritime applications - and remotely piloted platforms. Due to the development of new digital technologies such as Artificial Intelligence, automation and data processing, all these systems can respond effectively to the evolution of operations in the increasingly multi-domain maritime context.

In particular, the company is presenting some of its cutting-edge combat systems management technologies which equip, among other assets, the ‘Full’ configuration of the Italian Navy’s Multipurpose Offshore Patrol Vessels (MOPV). These include the open-architecture, modular and reconfigurable Combat Management System (CMS), which integrates and coordinates all information from the various sensors in real time - providing full situational awareness and an immediate reaction capability – in any context, above and below the water. The innovative Naval Cockpit is also on show at Euronaval, again on board new units, applying cutting-edge concepts in avionics to the naval domain. These concepts were developed by Leonardo in synergy with the Italian Navy to reduce crew workload in operating and monitoring a ship, maximising operational benefits.

Boasting one of the world’s most comprehensive radar portfolios that meets the most stringent requirements regarding navigation, surveillance, detection and air, surface and missile defence, Leonardo is presenting the KRONOS Family of radars at Euronaval. This includes the naval version of the KRONOS Power Shield fully digital AESA warning sensor, designed to defend surface units from ballistic missiles. The L-band sensor, with advanced ATBM capabilities, has a discovery range of up to 1,500 kilometres. The high-performance OSPREY 30 electronic scanning radar for maritime surveillance, already chosen by several international customers, will also be on show. This radar is especially suitable for operating in mixed environments such as coastlines. 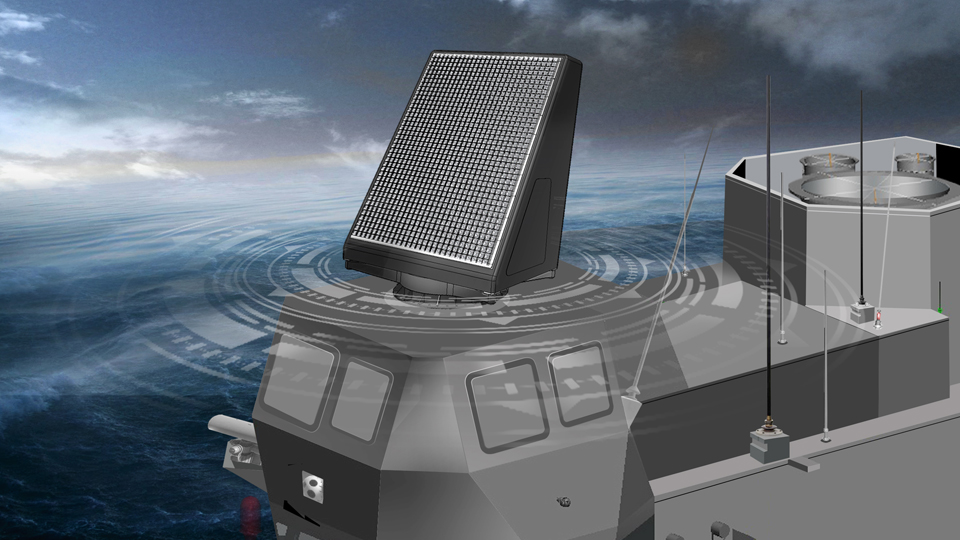 Alongside these solutions is the ULISSES (Ultra Light SonicS Enhanced System) acoustic sensor, developed by Leonardo to maximise effectiveness in Anti-Submarine Warfare (ASW) operations on fixed- and rotary-wing maritime patrol aircraft through minimised weight and size, and the Black Scorpion lightweight torpedo, designed to operate with maximum effectiveness and at minimum cost. During the exhibition Leonardo is also presenting the features of the new next-generation electro-optical system DSS-IRST (Distributed Static Staring-InfraRed Search and Tracking System), developed to offer larger naval units maximum protection against multiple surface, missile and aerial threats.

In the field of remotely piloted systems, Leonardo is exhibiting in Paris a full-scale mock-up of the AWHERO helicopter equipped with the Gabbiano Ultra-Light maritime radar. AWHERO represents the state-of-the-art in 200 kg class rotary UAS systems, developed expressly for on-board operations, synergistically exploiting Leonardo’s experience and best technologies. AWHERO’s modular architecture makes it interchangeable with a wide range of sensors, including Leonardo’s Gabbiano Ultra-Light radar, a crucial element in ensuring maritime surveillance superiority.  Already successfully deployed during the Leonardo-led OCEAN 2020 demonstration initiative, AWHERO is the only UAS in its class with military certification, guaranteeing the highest levels of reliability and mission readiness. 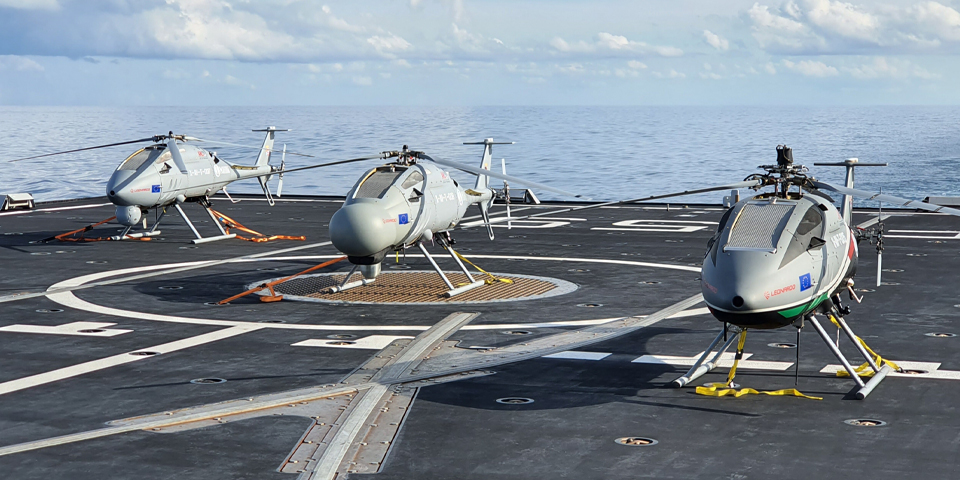 In the munitions sector, Leonardo - a world leader also in designing, developing and producing small, medium and large-calibre naval guns (12.7 to 127mm) - is in Paris with its Lionfish line of small-calibre systems, wholly designed and developed in-house. It is also presenting its DART (Driven Ammunition Reduced Time of Flight) guided munitions, effective against manoeuvrable missiles and small targets. Also important to mention is the Vulcano family of munitions in the 76 and 127 versions, a product range – already chosen by several navies worldwide - that ensures total surface dominance and effective air defence